Long before Jacob Javits became the hub for the NYC Toy Fair, there was the Toy Center at 200 5th Avenue. Toy Fairs then were not the horizontal open-air bazaars with aisles and aisles of playthings that we know today. Rather in the old Toy Center, the annual extravaganza was held in a combination of vertical towers connected by an oddly placed but functional “bridge” on the 9th floor that attached more exhibits at 1107 Broadway to the main Center.

Most toy and game companies maintained “showrooms” at the Toy Center and would not bother to exhibit at Javits; it was an inconvenient location mostly for startups. The Toy Center forced buyers and the thousands of miscellaneous fair goers to use the grossly undersized elevators or the narrow and steep marble stairways to get to the showrooms protected from un-welcomed visitors by an “appointments only” mentality. After all that physical abuse to find a company, there was little hospitality shown by the reception desk temp or business-suited security enforcer to any guest without an appointment. Toy Fair was a serious time for sales/orders, not for schmoozing inquisitive non-buyers.

Yielding to my curiosity about the old Toy Center, on Saturday afternoon, February 14th, I took my valentine, Leslie, to the changing neighborhood at 23rd and Broadway. Maybe this nostalgic photo op captures a few memorable scenes for those in the toy biz before Javits became the center of the toy universe. 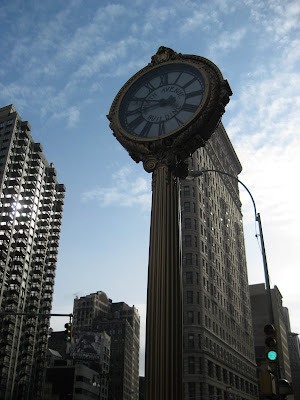 The iconic clock in front of 200 still stands with the incorrect time. Maybe the green light is saying "Toy people, do not stop here. Go directly to Javits." 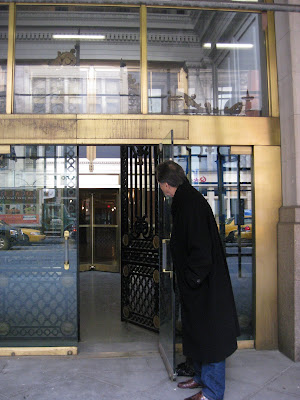 The 23rd St. side entrance may be open, but only the "ghosts of toy fairs past" are home.  Why is the entrance protected by a tunnel of street level scaffolding? 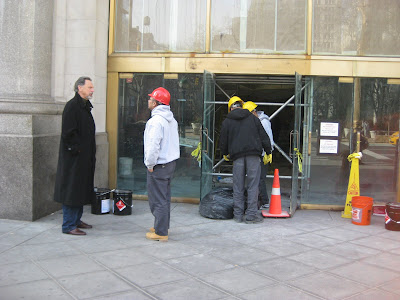 To my query, the workman says, "I told you once, but I'll tell you one last time, pal. I know nuttin' about showrooms, there's nobody alive in there! Guess they're puttin' in new offices or sumptin'." 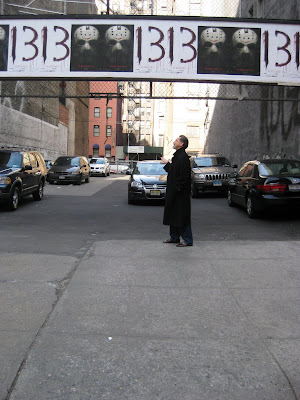 Wait a minute! Didn't I often park my car on the second or third tier of this lot one-half block from the Toy Center when I was silly enough to buck the NYC traffic? 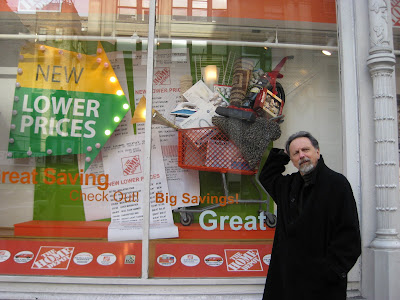 Yikes, a Home Depot. I'm confused! Isn't this the old Hasbro showroom on 23rd St. where I spent hours in meetings and Toy Fairs? 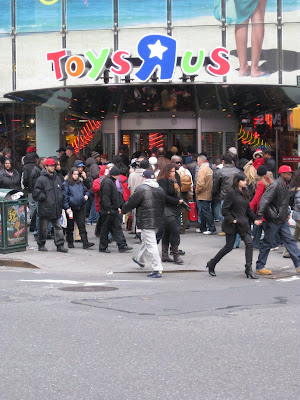 Safe at last back uptown where the toy business is still hoppin'! (Wonder if my new game, Quad*doku, will draw all these shoppers later this year!!??) 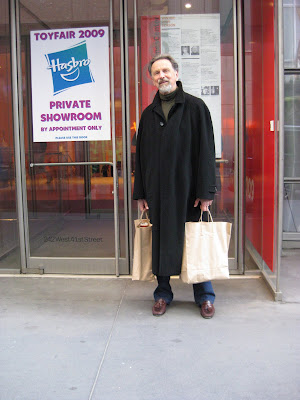 OK, Mike Hirtle, I know you're in this Times Center showroom on a Saturday. I have a few
great new game concepts to show you. No, I don't have an appointment! Guess if I can't get in, I'll just wait for the opening day of Javits, February 15, 2009.
Posted by Ron Weingartner at 1:31 PM 4 comments:

Build It and They Will Come

Another White Sox Fan
Being from Chicago and a long time baseball fan of the same team as Barack Obama, I knew a bit about the 1919 Black Sox featured in Kevin Costner’s movie, Field of Dreams. As you likely know, the movie focused on players banished to an Iowa north forty cornfield only to magically appear once a ball diamond was built.

It occurred to me there is a similarity between that movie, major mass-market retailers, and mall developers. When mall developers see an open field, it is not a baseball diamond they build, but rather huge mega-malls. Their hopes must be, “if I build it (a mall), they (shoppers) will come”. However, in these hard times of economic meltdown and changing shopping habits, shoppers are not coming. In fact, there are dire projections about retailers in 2009. Michael Burden, principal with industry adviser Excess Space Retail Services, expects as many as 14,000 stores will close in 2009. "We could see the highest ever number of closures," he said. And the International Council of Shopping Centers estimates that chain store closings could exceed 3,100 in just the first half of the year.

Such troublesome forecasts can only have a rippling effect on the toy and game industry., Anne D’Innocenzo in a recent AP article cites a number of reactions retailers may have to the economic climate, saying “ retailers will cut marginal suppliers, keep inventory lean, hold special buying events, and provide an array of products at lower prices.” I ask, “haven’t Walmart and Target been doing this already to industry marketers for years”? When we attend Toy Fair and witness the sea of products, hear the optimism and see the carnival that is Javits, it is astonishing that only a trickle of those products will reach the shelves of the two reigning retail giants. Those two retailers, in particular, have already cut suppliers, kept inventories lean, and pressured marketers for incredibly low prices. The result at big box stores is a sameness of limited selection of toys and games.

What might be the answer to the retail malaise? Re-emergence of TRU where there was always great selection? Increased traffic at “specialty” stores where there hasn’t been an inordinate mix of laundry detergents and bed and bath linens at the sacrifice of toys and games? More dot -com sales without the need of consumers in mall store aisles?

I must admit that as a “product” guy, I was never satisfied with “sales” guys’ explanations of why products couldn’t be offered at places more convenient to consumers as a way to increase sales. With travel games to sell, why couldn’t they be placed next to Coke and Pepsi at all those gas station mini-markets? Why weren’t those games with movie characters licenses placed in video stores or in the lobbies of movie houses next to the $8 popcorn barrels and $5 soda cups tempting consumers to buy?

Maybe now more than ever when consumers are reducing trips to the mall, products need to get closer to a potential buying event. Maybe if the temptation is heightened, the consumer may break out of buying restraint and make an impulse purchase. And maybe in desperation, we will have to go back to methods vacuums and hairbrushes were sold during past hard times. Would you believe?... Knock, knock. “Who’s there?” Ahhh, “toys and games”. (Can you see all those silhouettes in red suits with big, big bags going door-to-door all across America in search of consumers? Any unemployed Santa’s out there?)

Knock, knock, toys for sale!
Posted by Ron Weingartner at 5:21 AM 3 comments:

If coming to see Richard Levy isn't enough, come see the juggling act I've been working on for years. Surprisingly, I still have all my fingers.
The TIA has scheduled an open forum, The Creative Factor. This year the Drop-In Learning Center will be in Booth 4838. Check out the full lineup of topics in the Toy Fair program. Be aware that Richard and I will present at the Licensing and Business Hour on Sunday, February 15 and Tuesday, February 17 from 3 to 4 PM each day. Stop by with a smile, a wave, or a timely question. On Sunday, we'll be focusing on perspectives on how the industry has changed for inventors and on Tuesday how character licensing has shaped toy and game product since the release of our Toy and Game Inventors Handbook. You may want to mark a stop at 4838 in your daily Toy Fair schedule.
P.S. I'm working hard on that wrap-up to feature my life long dream: to juggle a chainsaw, a bowling ball, and an egg. Don't miss us!
Posted by Ron Weingartner at 4:05 PM 2 comments: 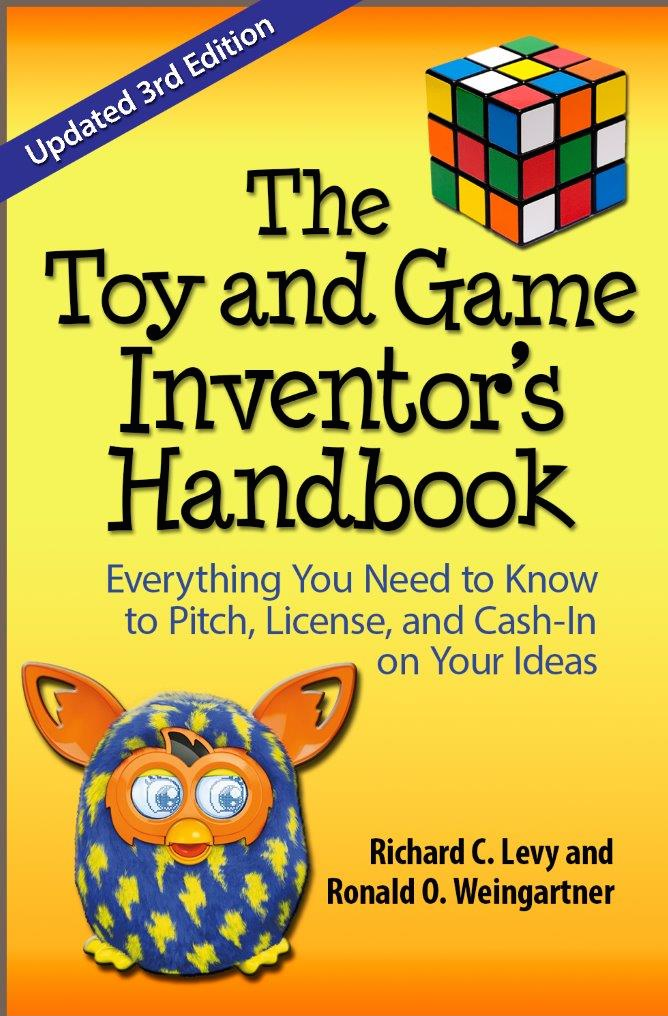 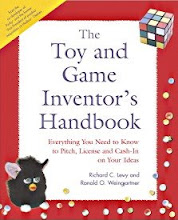